The Creeping Culture of Euthanasia 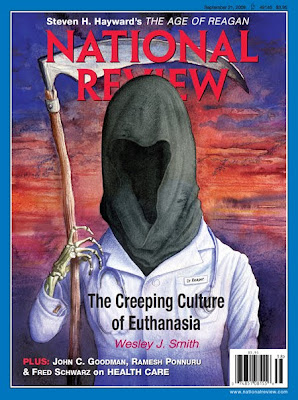 I was asked by the National Review to write a story for the magazine on the recent advances made by the assisted suicide movement.  It is the cover story.  There is no link, but here are few excerpts:

The assisted-suicide movement has come a long way in just a couple of decades. Consider, for example, this recent item from the San Francisco Chronicle: “Charlotte Shultz [the wife of former secretary of state George Shultz] accepted the invitation to be honorary co- chair (with Dianne Feinstein) at a Nov. 5 luncheon and program for Compassion & Choices of Northern California, saying, ‘I’m glad to support the cause, but I’m in no hurry to use the services.’”

Compassion & Choices used to be called the Hemlock Society. It is the nation’s premier assisted-suicide advocacy group.

When members of the social and political elite — people like Senator Feinstein and Mrs. Shultz — associate themselves with assisted-suicide groups as openly as they would with charities like the United Way, we have reached a new cultural moment.

There are some on my side of the fence who criticize me for conceding too much.  But I believe that “spin” is the last thing that works, particularly when you are on the politically incorrect side. After Washington and Montana last year, to say that the movement hasn’t advanced is to lack credibility by denying the obvious.

The question is why: I blame the “Oregon Myth,” the false assertion that assisted suicide in Oregon has essentially been problem free.  I spend some time demonstrating that it isn’t true, with examples of abuses–such as the Barbara Wagner/Randy Stroup travesty–and I illuminate the joke that is the Oregon oversight system:

These advances would not have happened but for a powerful myth promoted by assisted-suicide advocates and helped along by a compliant media: the notion that Oregon’s experiment with legalized assisted suicide has been a success, in which problems and abuses are rare or nonexistent. It is true that the annual statistical reports published by the Public Health Division (henceforth OPHD) of Oregon’s Department of Human Services have revealed very few problems. But there’s a reason for that: The reporting system was designed by the authors of the assisted-suicide legislation to be incapable of vigorous policing and in-depth data gathering.

As a result, nobody knows precisely what is going on in Oregon. The data in the state-published reports are based overwhelmingly on self- reporting by death-prescribing doctors — who are as likely to admit violating the law on this matter as they are to tell the IRS that they have cheated on their taxes. Indeed, as the bureaucrats charged with publishing the annual report admitted to an investigative committee from the British House of Lords, the OPHD engages in only very limited and random checking of the information it receives. Moreover, the department has no budget or authority to investigate apparent violations of the law, and all documentation relied upon in writing the annual report is destroyed once the report has been published.

Dr.Kathleen Foley, perhaps the nation’s premier palliative-care doctor, and suicide-prevention expert Dr. Herbert Hendin wrote in the Michigan Law Review last year that the OPHD “does not collect the information it would need to effectively monitor the law and in its actions and publications acts as the defender of the law rather than as the protector of the welfare of terminally ill patients.”

I discuss the reasons for the loss of I-1000 in Washington and the Montana court imposition of assisted suicide as a constitutional right. I get into the role of Compassion and Choices in Obamacare and its attempt to change its image into what could be called the Planned Parenthood of death.  I conclude:

Two thousand and eight was a banner year for the assisted-suicide/ euthanasia movement. It’s likely that no new states will legalize assisted suicide this year. But if the last 20 years prove anything, it is that euthanasia advocates are passionately committed, work hard, and feel that time is on their side. Are their opponents equally committed?

I hope the article will educate people who don’t pay close attention to this issue about the myth of Oregon. Even more importantly, I hope it will be a wake up call for all of those who oppose assisted suicide–but consider it a bit of a back burner issue because it can’t happen here. The year 2008 proved that they are wrong.